In case you thought I meant myself, well…

That’s so not me. But I’m working hard at it. Have been spending three hours a day, once our schedule emptied out for the summer, going through the piles. Dejunk, recycle, donate, you name it.

One of the things I’ve had to let go is my perfectionism (Down, I tell you! Down!) It would be really nice, say, to have a garage sale of all the stuff we’re getting rid of. However, I realized that such a thing would be a downer, a drag, in other words, putting on the brakes. It would add a level of organization to a job that is, frankly, almost overwhelming. You stuff your house full of two decades worth of accumulation, with only two real dejunking sessions over that span of time, and you’ll see what I’m talking about. Sono Harris, with her annual (or was it every six months?) purge, had a better idea.

If it must be done, ’twere better done quickly

No, I have to get the stuff out of the house quickly, while my resolve is firm. Having it pile up in the garage, waiting for a yard sale, is too much of an energy drain.

It’s as much as I can stand to recycle, and the main reason I do that is that recycling gets hauled away “for free” while additional trash bags (if they don’t fit in the trash can) generate a fee of about $10 each. A dumpster is several hundred dollars. It’s amazing how much you can cut down the trash going out for collection if you separate out the paper and plastic. Oh, and it fits with today’s environmental focus, too.

I’m really good at sorting. It’s the “getting rid of” or “letting go” that has stymied me to this point. Recycling is sorting, so it’s not that hard. Storing up treasure for a garage sale is a sort of extended “letting go” that I know I can’t manage at this point. Maybe once I’m organized I can do a regular purge-and-garage-sale, but I know I’d just be throwing an obstacle in my way if I tried to do it during this huge take-back-the-house campaign.

Got to keep the momentum going.

(If you, on the other hand, want to profit from your purging, go for it. I hear that it’s a good idea to price as you go — then you don’t have to go through that pile of stuff in the garage yet another time and make more decisions. Either that, or hold a sale on a donation basis. Let people offer what they think an item is worth.)

I’m not going to offer before-and-after pictures on the blog. While I’ve found these motivating, on other blogs, I don’t really want to show the world all my clutter. You’ll just have to take my word for it. There’s a lot of it around, sitting in piles. Some of the piles are neat. Some piles are hiding in boxes, masquerading as organized clutter. (There’s an oxymoron for you.)

And for another thing, I can’t find the charger for my camera battery. I’m hoping it will emerge sooner than later, as the clutter gets moved out of here. 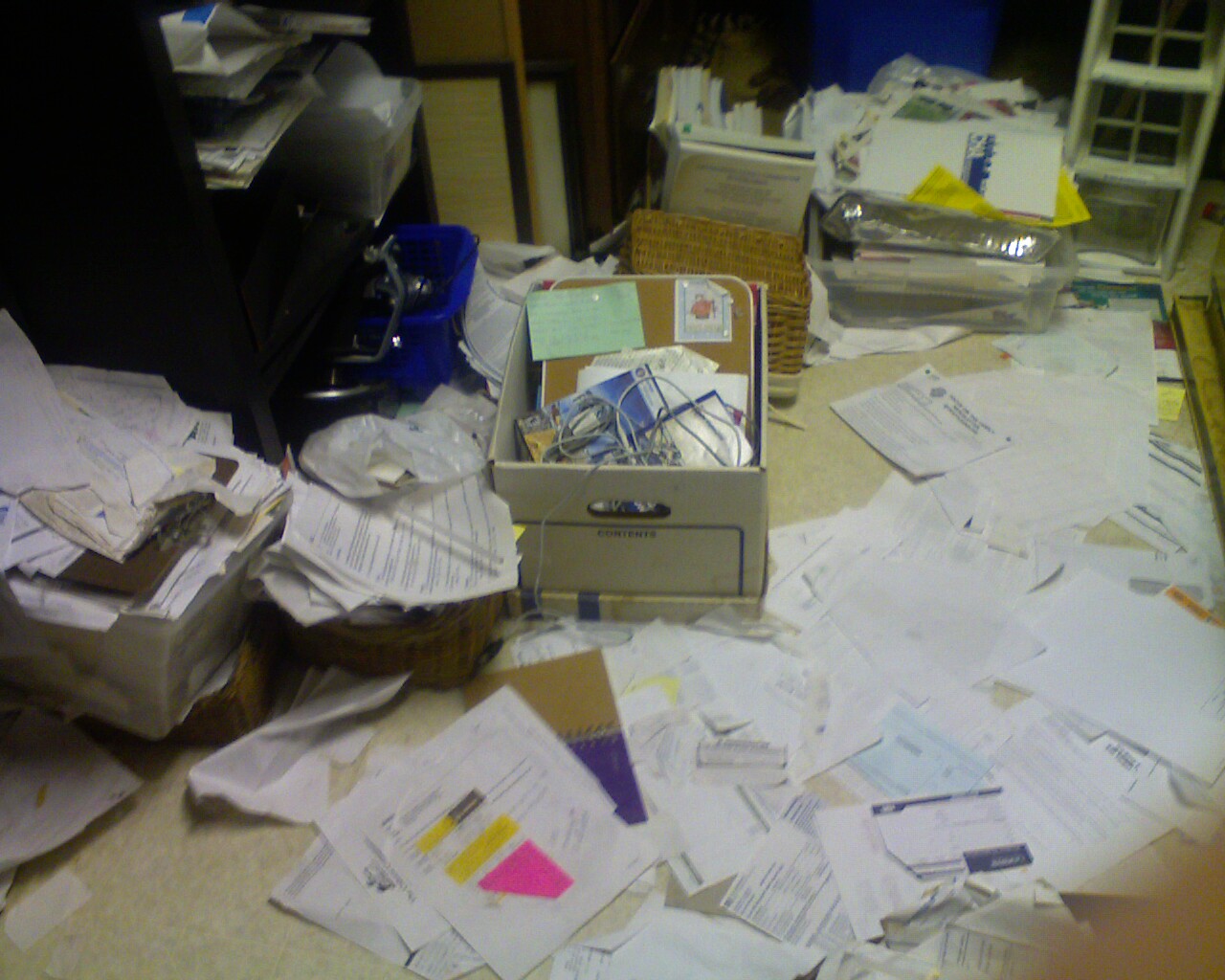 Not mine. From "Confessions of an Organized Mom" blog. Mine may look this bad. Or worse. Or maybe not as bad. But it's getting better. (Monty Python, anyone?)

In other news, the Organized Homeschool Mom blog has moved, so I thought I’d post the updated link for your convenience. Good stuff there.

Happy organizing! Is that an oxymoron, too? Well, no, I don’t think so. Though I used to have anxiety attacks when I’d try to get rid of stuff, this time, it’s getting easier to let go with each load that leaves the house. We can talk more about that later, I hope.

A light that shines in the darkness

Long my imprisoned spirit lay,
Fast bound by sin and nature’s night.
Thine eye diffused a quick’ning ray—
I woke, the dungeon flamed with light.
My chains fell off; my heart was free!
I rose, went forth, and followed Thee.

Amazing love, how can it be,
That Thou, my God, should’st die for me?